Hello, and welcome to the Development Blog for my 2D Land Exploration project/game "EmptyLand" 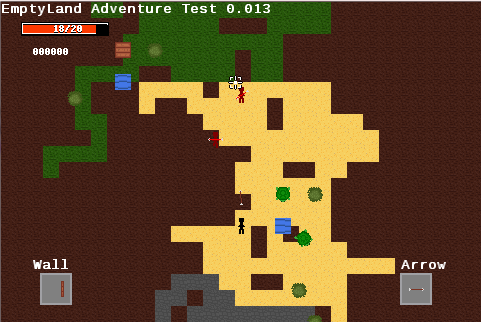 Another fun build! BowMan enemies have been added to adventure mode. This also means that you can now die in adventure mode. With that is the score system, which will later determine difficulty. Flesh now has a purpose since you can lose health, and that purpose is to restore some health. Eating it produces "Dust". The sandy area generation has been changed, adding Bushes and Water. The scattered and unorganized water will be changed soon. There are also some more changes that are very small, such as the dirt texture being modified, and the names of dropped items appearing when standing over them. That's it for this one! I have been testing some cool new dungeon features, expect them soon! 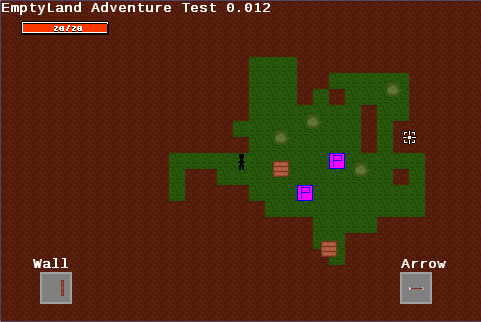 New Build! This mostly optimizes Adventure mode, and changes some arrow stuff. I am in a little bit of a rush, so here is a messy list of changes:
New Turtle AI
Arrows are now default item (Temp.)
Arrow collisions with blocks changed
Arrows destroy when leaving the map
FloorTile optimizations! Adventure mode should run 46x faster
Floor Tiles are no longer seperately saved, but rather regenerated using the same seed
Disabled loading while ingame. Press "L" to load in menu
InDevelopment: BowMen. I hate their current AI, but I want to release an update, so their place is being held by "P-Blocks"
Menu now says Adventure Test instead of Construct 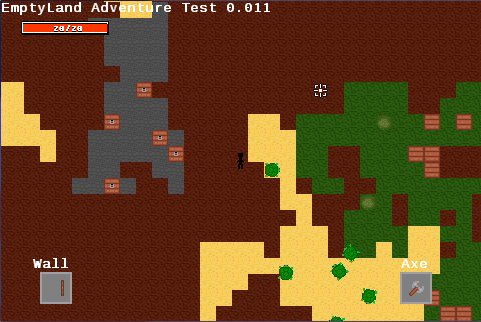 I am releasing this really experimental build that adds a few new features involving the new Adventure Mode! It adds a test adventure mode, and Walls to place. Try it, and give feedback. Expect much more frequent updates for the game as I will be adding new features on the fly. Report any issues you find with this build and I'll try to fix them. Thanks for playing! 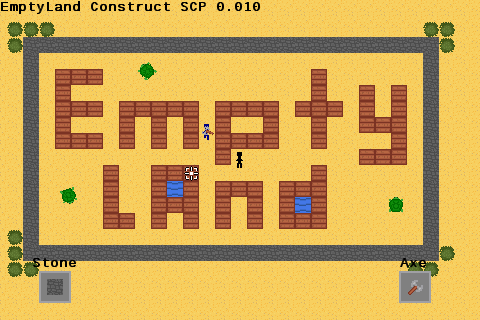 Here it is : the newly coded EmptyLand! Welome to the (short-term) development stage of EmptyLand Construct Source Code Port (SCP). I have completely recoded the game using GameMaker Studio, rather than the limited and buggy Clickteam Fusion in hopes of more freedom and utility. Though I am very new to GameMaker, I managed to undergo porting the game to the engine. For the first day or two of development (July 4th or 5th), I had looked at the Clickteam Fusion "code" and translated it as best as I could to GML. This process was unflattering, so I eventually just tried to rebuild all of the other things from scratch. I did recieve most help from the manual, and some more from the GameMaker reddit when I was completely lost as to what to do. Because of the indirect porting, and remaking, the game is much different internally, much more useful to me. The game will drop the SCP tag as soon as I get past the Construct! stage. After the constuct stage, I expect myself to make the game more enjoyable while playing, rather than just being enjoyable to code, as I feel it's current state is not very exciting or fun, and mostly a boring sandbox game. The construct stage should only last a short while longer before I switch to a more fun and playable stage of development. Please feel free to report issues to my GitHub so I can take a look, and don't be afraid to look at my code, even though it is most likely a horrid mess compared to experienced GML programmers. Looking at the code and sharing problems or suggestions of code optimization is very much appreciated! Thanks for the patience and thanks for playing this game! 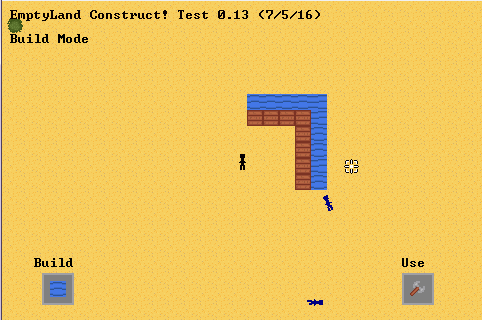 This release fixes many problems, and adds some new features as well. There is one thing to announce though. Recently, I had felt the urge to abandon this project due to the limitations Clickteam has on their engine. I thought about it, and then decided that I still want to continue working on the project, but need to use a different engine. So I started to re-build the game from the ground up with Gamemaker:Studio, and so far, progress is phenomenal! The next release, EmptyLand Construct! SCP (Source Code Port), should come out very soon. But this release, is the last one of the "EmptyLand Construct!" series. Enjoy!

New Things
"Man" An NPC that can destroy your stuff (and soon will be able to destroy you). 40% chance of dropping an Axe
Particle effects when breaking blocks!
Texture Changes
New Stone Texture
Changes to Gameplay
Arrows are 25% slower
Items dragged to slot are no longer replaced, but are placed next to the player
The game can now be paused with enter (Save and Load in pause screen)
Turtles now have higher health
Other Things
NPCs are now saved (and loaded)
Items dropped by NPCs and Chests now slightly move upon being dropped
Entities can no longer leave the Play Area
Fixes
Fixed bug where Player could go through blocks if they were surrounded by water or bushes
Fixed bug where Turtles could go through walls
Tests
Chests! A random item is given from the chest when clicked twice. Not yet fully implemented. 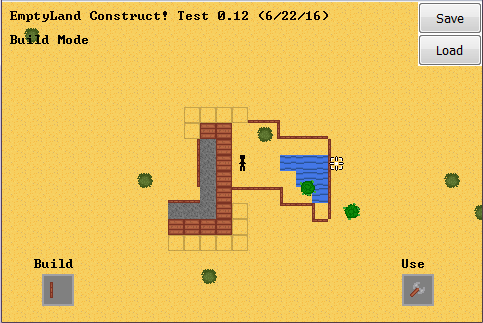 This release changes some dynamics of the game, and adds 2 new objects. There isn't much else to put here besides the changelog, so here it is: 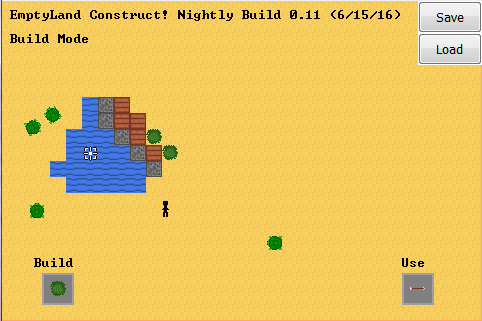 This is the First Build ever for EmptyLands Construct. A few changes were made since the first post from the site, and even after this screenshot was taken (just some text was modified). Also, the site has a new downloads page, and a navigation bar. 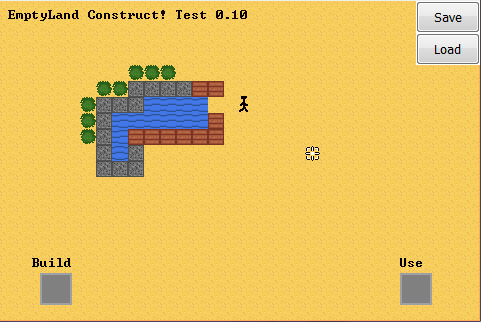 Ok, so I'm planning on releasing nightly builds for the game. They will be downloadable on a seperate page on this site. I also wish to make this page look nicer, as it is incredibly bland, but that is not currently important. What is important is the list of many additions to be alied to EmptyLands.